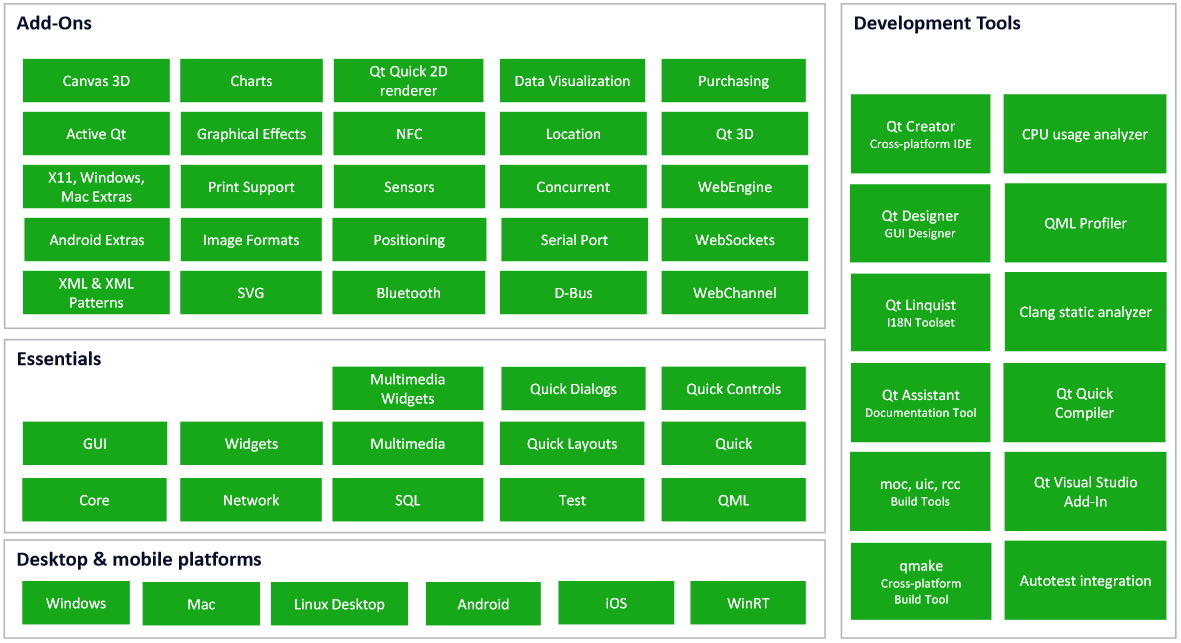 There is a question whether C++ is growing in popularity or not. But nowadays it’s popularity is increasing also due to the Qt framework (supported by the Qt Company with headquarters in Espoo, Finland). The bundle of “C++ and Qt” saves a lot of time and money, helps to get your product to market in a short time. The final applications are binary and thuswise fast as they are written in a native Integrated Development Environment (IDE). In this article, we try to show the basic preferences of Qt, note its limitations and briefly mention when the use of Qt is optimal from a practical point of view. Before continuing it should be said that the Qt framework supports development in other languages like Go, Ruby, JavaScript, and others. But now we are speaking about incredible C++ :). Well, because it is C++.

The DevelopEx company widely applies the Qt framework for developing projects that should work both on a desktop and on other platforms. No need to remember about the huge advantage to develop several sub-projects just as if it were one. Not to mention the ability to build a project for as many platforms as needed just by using the appropriate toolchains.

Our DevOps engineers do not care about how to deliver the builds to a QA department because we’ve implemented continuous integration with Jenkins. The automation server builds and uploads project files to internal storage automatically. The project manager does not have any worries about risks when the application is updated because the code is structured in a Model-View-Presenter MVP pattern. This means that in case of issuer or updates it is enough to modify a single “model” logic. And sometimes (but rarely) in “presenter logic” that is separate for each platform. As the code is written in C++ and compiled by GCC to binary, a Qt application executes as fast as it would be if it is written in a native IDE.

We as an outsource company see the following advantages of Qt:

It is said Qt is just a GUI toolkit. Yes, Qt is the best choice when an application’s UI should behave in the same way on different operating systems. But generally speaking, Qt is just a large C++ library (yes, with a cute IDE and other goodies). That is why any project could be realized using Qt. The proof is in a large number of projects that have been written using Qt. The technology branches where Qt has been applied are:

Qt supports many requirements that are satisfied nowadays with business apps. The framework allows you to access a backend API via WebSockets or REST/HTTP. It is possible to add maps and location along with the display HTML5 content. No problem to organize access to sensors, work with multimedia and databases, connect via Bluetooth LE or NFC. The built-in localization features are also a huge advantage.

It’s a stupid idea to highlight some “main” and “periphery” components in the Qt. Because all of it matters. Nevertheless, there are some Qt modules that simplify the life of both the developer and customer incredibly. Subjectively, there are:

Qt has a complex system of licensing. The license depends on what is needed to develop a product. Basically, there is an open source (GPLv3 and LGPLv3) and commercial licenses.
LGPL differs from GPL in that not all components of Qt are available under LGPL.
For example, Qt Charts, Qt Data Visualization, and Qt Virtual Keyboard are available only under GPL.

From a technical point of view, the subsequent product includes the previous one and adds new components and tools. Basically, if you create a coffee machine and use Qt then you must have a Qt for Device Creation license because it is a licensed use of Qt.

Brief differences between licensing are given in the table below.

If we dig deep enough we find there are some issues with Qt.

Qt is among the top five most popular frameworks for mobile development in 2016. But it is still is far from the leaders (Cordova and Xamarin).

UX requirements for different platforms are different. Even though QML allows cross-platform development, most prefer native implementations on Android or iOS. In the majority of cases, Qt does its own painting. That is why an application that is made with Qt doesn’t look like a native app. For example, on Mac machines, split bars are thick, buttons are small and rounded with icons. On Windows machines, split bars are typically narrow, and buttons are more textual, with a more square design.

Qt requires a separate compilation step. It makes the build process much more complicated when compared with most other libraries. As a result, C++ IDEs and tools may not understand Qt’s specifics and can flag some Qt expressions as errors. This almost forces use of QtCreator or a text only editor like VIM.

Qt/QML is still not mature enough for Android/iOS. It could be a problem to work with BlueTooth or native controls. That is why very easy to reinvent the wheel if you write under mobile. There are several major issues for using Qt for Android:

Sometimes Qt is used in strange ways that can cancel out many of the benefits. A few examples:

When Using Qt is Optimal

A good example of an optimal use of Qt is a desktop project with its mobile versions. Qt is the best choice if an application should work in the same way on different platforms and it is O.K. to sacrifice a little of exact matching on the GUI. Also, it is not a problem to extend a desktop+mobile project by mobile-only versions. We follow such practices and find them to be effective.

On the other hand, it is sometimes better to develop mobile projects using native tools. Even if the project is designed for Android and iOS it is better to develop it as two different sub-projects. It is more expensive but the final output will be worth it. However, it is not dogma and in some cases, cross-platform mobile development is the optimal choice.